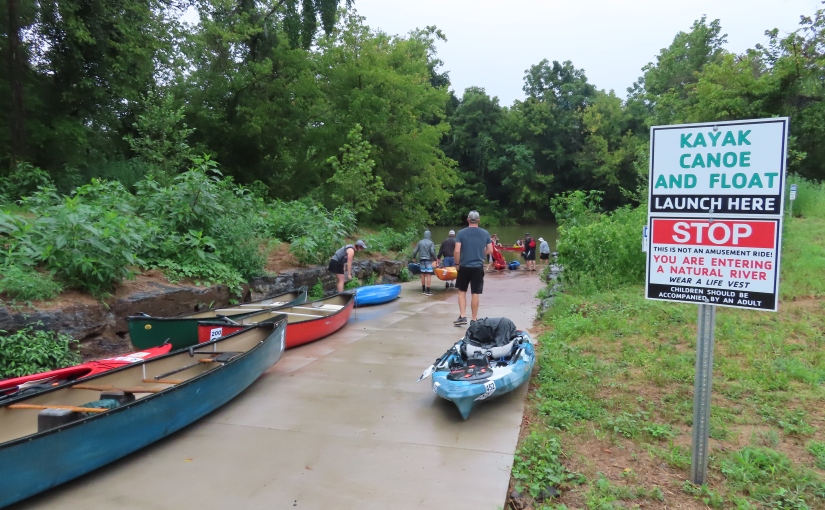 The day of the boat race came and it rained. It wasn’t a hard rain, just persistent. The racers lined up their kayaks, canoes, and paddleboards by the launch. Thirty-two were registered.

The Rescue Squad was down by the weirs ready to handle whatever came at them. They would man the weirs when the first boat was spotted.

A spotter stood on the first weir and watched. And it rained.

Right around ten o’clock, the first of the “open” boats came through. The races leaving from here would only be racing two miles (I think) but there was an “open” category that was put in further upstream for a 6 mile course.

This, by the way, is a racing kayak.

I was not previously aware of racing kayaks. The second boat through was a local river expert riding an Epic.

Like the first boat, he had no trouble coming through the weirs.

It looks like he might have gotten some water on the last weir but it could have been the angle of the shot. I didn’t notice this until I got home and he had continued on with no issues.

Meanwhile, the other racers had moved their boats onto the launch.

And they began setting off in two minute increments.

I never did figure out where they came out of the water. It was a little cold and a little damp and I was distracted by getting a coffee and a warm apple fritter in downtown Madison at the Mad Bean.

Maybe next year I can actually run the race. Not in a racing kayak. Too rich for my blood. But there were people in canoes and regular kayaks too.

I did finally figure out how you get on the water here though. I was looking up the park but I should have been looking up MadTown Tubing.

Instructions for how to get on the water with MadTown Tubing:

Go to MadTown Tubing in Downtown Madison at 102 North Water Street. You can park directly across from the Tubing headquarters or you can park in the public parking lot a few blocks up the road in the heart of the shopping district. You will probably want to wrap up there anyway eating in one of the restaurants or having a recreational beverage (there is a coffee house, and craft brewery, and a distillery?).

Have a fun, safe time on the river.

One word of caution: Do not call the Town of Madison’s number that is posted on the Madison River Park Facebook page. They will tell you that the town owns the park but has nothing to do with getting people out on the river. They didn’t seem super happy about the influx of calls they’ve been getting lately. MadTown Tubing is run by the town’s Parks and Rec Department. 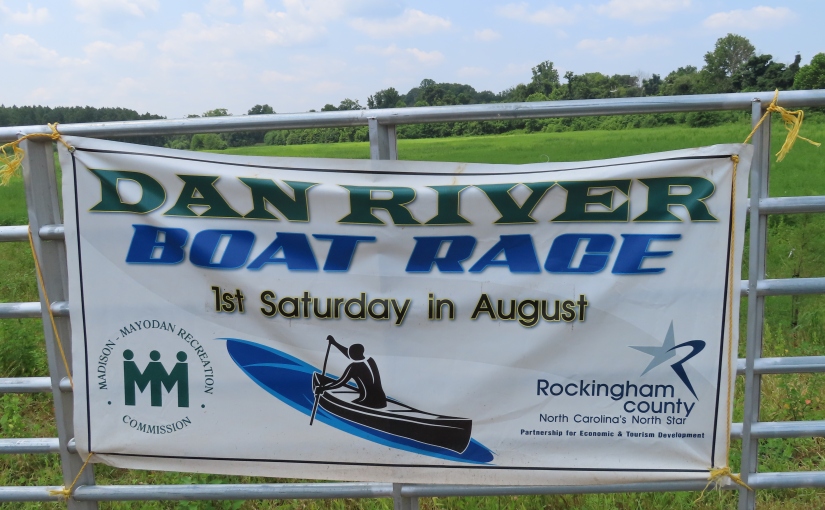 No. No, I am not ready for whitewater.

The Powers That Be have got my blog’s Kayak Quest caught up in some kind of incredible current. So much so that I haven’t had a chance to regale you with stories of how I now have a roof rack affixed to the top of my car that acts like a giant flute, I finally made it down to the outfitters in Greensboro only to discover that I fall in love with all new kayaks, and I’ve had a proof of concept ride with a group of friends from church. I even got an invitation to go on an incredible ride on Wednesday but I’ve got to start stomping the brakes somewhere.

I started looking into Madison River Park because I ran across a news report on YouTube and I thought it sounded like a great idea to get a group to go tubing together.

In a nutshell, Madison is a small community about twenty minutes to my south in North Carolina along the Dan River. The Smith River runs through my community and connects to the Dan. The Dan River Basin Association runs group activities like hikes and kayaking trips each month, often starting on the Smith. My community and theirs are pretty closely connected by these rivers.

Apparently, there was a dam along this stretch of river that was failing. The town was told it would take between 8 and 15 million dollars to replace the dam but they only had 5 million. Then someone got innovative. I’ll leave the reporting to the journalists (see a great article here) but the synopsis is that they teamed up with the US Department of Fish and Wildlife and, with a little help from North Carolina’s General Assembly, built a seven-weir system with ten thousand tons of rock with a grant of 2.5 million dollars and no cost to them.

The Madison Recreation Center started a tubing program in the summer of 2020, in conjunction with this project, and the article I read said that was contributing $30,000 a year on its own. Which, I have to say, is brilliant since it is really hard to find any information on how to actually get on a tube. Remember, trying to figure out the logistics of doing just that is what got this all started for me.

Madison River Park does have a Facebook page but, unless you call them, there is no information about how to rent kayaks or tubes, what is the minimum number of people to book for, where do you go to put in the river, where will you get out, etc, etc. Take a look for yourself: Madison River Park Facebook Page (I dearly hope that they make a fool out me by fixing all of this).

I went out to find the park myself last week. I thought that maybe there would be a storefront there where rentals took place or all of my questions would have a logical answer if I was standing there, looking at it. What I found impressed me for other reasons. Kayaking reasons.

There is a really nice, long concrete launch that goes all the way out to the water. Having been following a Facebook group for kayaking on Facebook for awhile, this looks ideal for solo kayaking (not that I’ve done that yet). I know that a buddy system is always better. Don’t yell at me. The solo kayakers I’ve seen on Facebook say that they look for rivers where they can park and then paddle upstream for awhile before letting the current bring them back.

And current is what the weirs do.

I’m probably oversimplifying this but the ten thousand tons of rocks in the weirs channel the water to the center of the river. When I went out last Friday, I ran into a kayaker from Greensboro. He had brought his Piranha whitewater kayak up to play in the currents and eddies created by the weirs. He said that the rivers everywhere are low – too low right now for kayaking. These weirs make this part of the Dan the only place that he could go play until it rains again.

Madison is hoping that the new park will help bring in 250,000 visitors annually and between 20 and 30 million dollars in tourism dollars. There’s a good chance that they could do that but they could certainly help it along. The kayaker I spoke to on Friday had no idea that Madison’s downtown area was really close by and that it had a brewery, a distillery, and two restaurants. And that’s not counting the coffee shop. He was on his way out and was excited to check it out based on my suggestion.

I had to go back out today (on my lunch break) because I had not noticed that my camera was set on “food” when I was photographing the rapids on Friday. It was that bad. I wondered if I would be seeing an empty park on a Monday morning.

There was a group setting off with their tubes. I stopped them and asked them how they were going to get out without a shuttle. They said that they had parked a second car further downstream and offered to take me with them if I would like to go. I explained I was on my lunch break and thought about all the Medical Examiner shows that I watch.

There was also a woman and her mother looking for a place to swim. They stopped me to ask what I knew of places to swim. They had seen a sign but were unsure. There is a sandy beach-type area.

I was unsure too and basically told them the same thing that the sign says (I found the sign later). Based on the master plan sign, this area was envisioned for a beach. Which implies swimming. I’m not so sure that swimmers need the current or that kayakers are going to appreciate swimmers.

I’d really like to get on this river in my new-to-me kayak. I don’t feel comfortable doing it alone but a river race might not be the best time for that either. I plan on calling tomorrow to see if they have a non-competitive entry.

So far, though, it looks like this park is a very popular spot. It looks like it will probably have a good chance of having kayakers in it on any given day.

But these are real kayakers who know what they are doing.

What I need is a bunny slope. (Not that I ski either).

If you are a kayaker or at least less timid that I, do consider the Dan River Boat Race. I just found the link and I’m really leaning towards it. 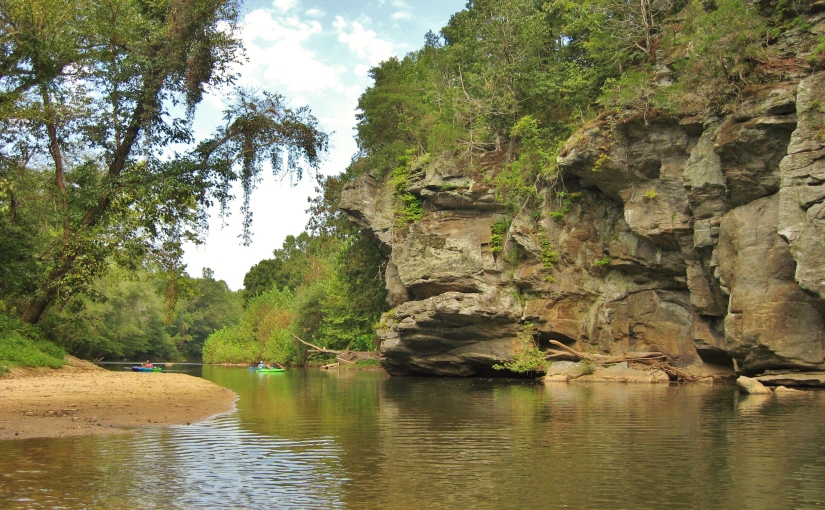 After my trip down the James with my mother, I came home and told my husband that we just absolutely have to do this together.  He immediately started scouting for trips a little closer to home; specifically, trips with nothing over a Class I rapid.  He found a couple of different companies online but only the Dan River Company described what to expect from the actual river trip to his satisfaction. (We want to eventually do everything – try them all – but you have to start somewhere and he’s pretty adamant about this Class I rapids thing.) END_OF_DOCUMENT_TOKEN_TO_BE_REPLACED