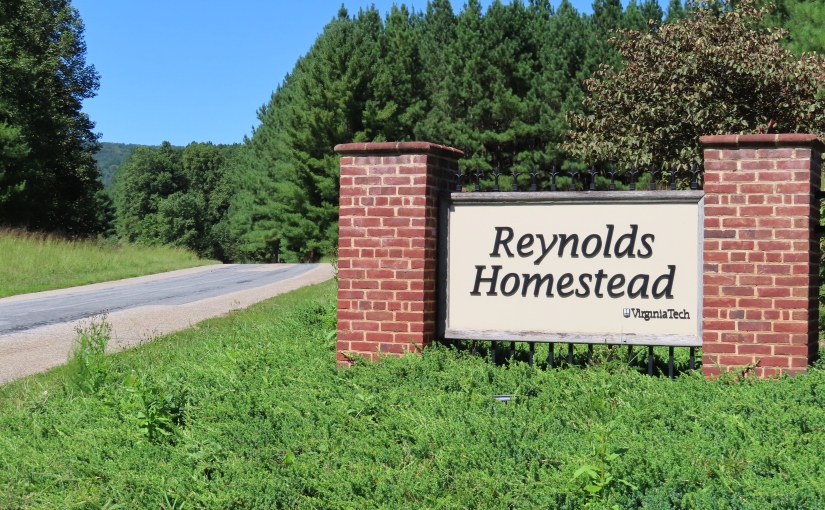 It was just me and the tour guide, Beth Ford, and the house. We both wore masks, which are required, and I did not feel uncomfortable or unsafe in the slightest. They have two more dates posted to their Facebook Events page: October 18th and November 15th. This is a great tour for history buffs and photographers, so consider signing up if you have those dates free.

The Reynolds Homestead is located at 463 Homestead Lane in Critz, Virginia. From Martinsville, you take Highway 58 west like you are going to Stuart and, about midway there, you’ll turn north. There are a couple of different roads that will get you there. They are both clearly marked and the countryside is beautiful either way. Personally, I think taking Abram Penn Highway (State Route 626) is the prettiest because there is a valley to the west and the panoramas are spectacular.

The Reynolds House is not huge by any modern standard. Compared to log cabins in the time that it was built, it was. The history here begins in the early 1800’s and extends into today thanks to the efforts of Nancy Susan Reynolds, daughter of the famous R.J. Reynolds. The RJ Reynolds Tobacco Company brought us such cigarette brands as Camel, Newport, Doral, and Pall Mall.

In 1968, she purchased 700 acres of the original plantation and donated it to Virginia Tech with three requests: That the story of her family be told, that the land be used for research and development, and that art be brought to the community. All three of these requests continue to be honored through Virginia Tech’s stewardship.

The home tour starts at the back of the home and goes through all of the rooms before returning outside to look at the old kitchen building and the ice house. There is so much history here, you can really take your pick of the part of the history you are interested in. There’s self sufficiency in such a remote place in the 1800’s. There’s slavery. There are generations of history and, although RJ Reynolds gets the bulk of the attention, the home here is really the story of his father, Hardin Reynolds, his mother, Nancy Jane Cox Reynolds, and his paternal grandparents who began the plantation in 1810, Abram Reynolds and Polly Harbour Reynolds.

This story begins with tobacco. And, maybe, a love story? I am always fascinated by women who forsook the city to take on a life of certain hardship to follow their husband. At one point in time, the Reynolds forebears were just regular people choosing an incredible risk to live deep in a heavily forested land and carve out a livelihood. Abram started here in 1810 and it was 1825 when he bought the 598 acres that would eventually become the homestead site.

In 1828 he sent his son, Hardin, to Lynchburg to sell a barrel of tobacco leaves. The trip was arduous and the resulting sale was disappointing enough that Hardin was able to convince his father to start making plug tobacco and a small factory was built on the lot out of logs.

And thus started the Reynolds family foray into tobacco. But there’s so much more. Hardin would go on to build the home that I toured today. He and his wife would have 16 children, only eight surviving. There would be a bout of small pox that would take three. One surviving child would be RJ Reynolds, who would buy his share of the family business in 1867 and move to Winston Salem in 1875, where his purchases of French paper and Turkish tobacco for Camel cigarettes would cause Winston Salem to be declared a US port of entry, despite being 200 miles from the coast. Another would be the father of Richard S. Reynolds, who would found the company that brought us Reynolds Wrap.

There is a family cemetery plot that was used as recently as 2014. If you are interested in family histories like the Astors, Vanderbilts, et cetera, it holds its own.

But the home is a monument to Hardin Reynolds and Nancy Jane Cox Reynolds. It was restored to how it appeared when they lived there. Overhead lights have been removed and some furnishings have been returned. The rifle over the door in the dining room is a Union rifle found during the Civil War when Union troops passed through. The family had hid on nearby No Business Mountain.

An astonishing amount of light comes through the windows – enough so that a camera set on “auto” will not feel the need for a flash. The tour guide has interesting stories about many of the pieces in the home and actually has a degree in history as well so I couldn’t have been in better hands.

For example, the piano in the parlor is original to the house. It was a gift to Nancy Jane from Hardin because she had brought slaves with her and had to send one of them back home after there was a conflict with another slave in residence. The terminology is tricky, so forgive me if I’ve worded it wrong. It is hard not to give offense when talking about an offensive subject.

The tour takes in all the rooms of the house and discusses how the home was built over the course of fifteen years. The master bedroom and the children’s room have so many pieces from history there is too much to relate here, but I did have two favorite items – Nancy Jane’s mourning dress and a clever oil lamp clock.

The mourning dress is not a replica. This is the actual mourning dress Mrs. Reynolds wore and Ms. Ford pointed out the white lace trim on the cuffs would only have been added as an embellishment as the mourning period was drawing to an end. Hardin died in 1882 but Nancy Jane survived until 1903 so this would have most likely been the way the dress was packed up and put away.

This Grand Vals oil lamp clock could tell time by the amount of oil used. Along the side, there are numbers starting with 8 at the top and 5 at the bottom. As the oil was used, in theory, you could tell what time it was by reading the line that corresponded with the level of the remaining oil.

Outside of the house, there are two outbuildings to tour: the kitchen and the ice house. The kitchen has quite a few artifacts in it besides being interesting just as a kitchen. The shelves to the left of the fireplace (pictured below) were actually stairs leading to an attic bedroom intended for the cook.

The last building to see is the ice house. It’s visually uninteresting but exactly how they got ice in the first place is the trick. Think about it.

In honoring the benefactress’s wishes to bring arts to the community, there is a separate building called the Community Enrichment Center. Virginia Tech offers various classes here and there are a number of groups and activities available, including the College for Older Adults. The Reynolds Homestead’s web site is updated regularly and my links often break. If you’ve hit a broken link go here: https://reynoldshomestead.vt.edu/ and look for Programs and Events.

If you are interested in taking the tour in person, don’t forget to check their Facebook page for the scheduled tour dates under Events. It is well worth the time. And, photographers – there is a lovely nature walk next to the house and can produce some beautiful images. There’s a reason that this place is popular for weddings.