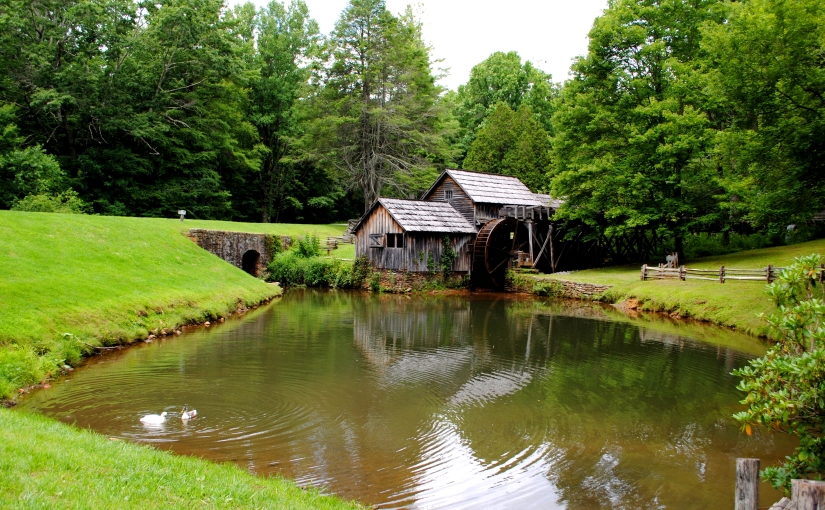 If you are sitting at a desk in Dallas looking up photos of the Blue Ridge Parkway, there’s a good chance that the majority of the photos that you are seeing are from the North Carolina stretch.  I don’t know if they just do a better job of Internet marketing or what the deal is there but there is one site along Virginia’s Blue Ridge Parkway that is touted as the most photographed. That is Mabry Mill.  It’s about an hour from Henry County, maybe a little less, just north of where the Parkway passes Meadows of Dan.  Part of the National Parks System, Mabry Mill is a perfect blend of natural beauty, history, and local fare.  The Mabry Mill Restaurant is lauded for its  sweet potato, blueberry, and apple pancakes made from buckwheat and corn meal ground at the mill.

Beyond the obvious draws of a National Park site steeped in history, Mabry Mill has a large assortment of visual features that entice photographers.  For one thing, and this won’t be immediately obvious unless you visit in May, there are huge stands of rhododendron all along the parkway and on the grounds of Mabry Mill.

I haven’t made it to Mabry Mill in May yet but, if you aren’t familiar with rhododendrons, here’s a photo of a rhododendron blossom. Now, imagine a hedge of these lining the path and you’ll see what I mean. A lot of people here call them “Rhodies”.

Even when the rhodies are not in blossom, Mabry Mill is visually intriguing with races carrying water through the woods and boardwalk and walkways criss-crossing to the mill.

Ed and Lizzy Mabry originally opened the mill in 1905 and operated it until 1938, when Ed passed away and Lizzie sold it to the National Park Service.  Ed Mabry, who saved up some money working in the coal mines in West Virginia to buy the land here, really wanted a water-powered mill that could grind corn into corn meal and saw logs into lumber. The problem was that his creek wasn’t strong enough to power one. He made it happen by buying additional acreage and building races to outlying creeks and streams to increase water flow to the mill.

According to a biography of the couple in Blue Ridge Country magazine, he still had to wait for rain to be able to run the saw mill, though the wheel’s power was sufficient for grinding corn, slowly.  The slow grind turned out to be an advantage because other mills in the area could sometimes scorch the corn meal from grinding too fast.

The sawmill and gristmill sit side by side in the wooden building the butts up to the pond.  Visitors can go in the large doors on the other side and see all of the inner workings.  Grist milled corn meal and buckwheat is available here and from the gift shop.

In this small sawmill Uncle Ed used the power of his water wheel to saw lumber for himself and his neighbors. Logs were rolled, one by one, from the log deck onto the carriage and “dogged” in place with the iron hooks. The headblocks were moved forward the width of one board after each cut, by means of the hand wheels on either side of this panel. The carriage was moved forward to the saw by means of an ingenious gear arrangement which, in turn, was connected to the under side of the carriage and controlled by three levers directly behind the saw. If he desired more speed, he diverted more water over the wheel with the control lever on the wall behind the carriage control levers. 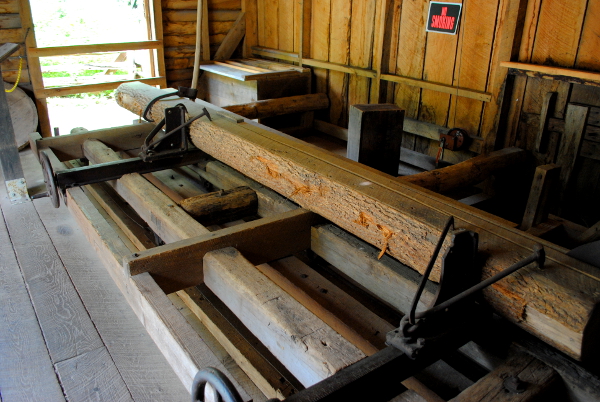 The mill is fascinating and quaintly beautiful.  Light comes in through the windows through which you can see the wheel lazily turning and ducks swimming on the pond.

The next stop from the mill is the Matthews Cabin.  This was not the home of Ed and Lizzy Mabry.  The Mabrys had a two story frame house approximately where the Matthews cabin now stands.  It was torn down in 1942 by the Park Service and the log cabin was brought in from nearby Galax.  The cabin had had a lot of renovations (most notably, a metal roof and something like siding) by the time it was moved to the Mabry Mill site but the Park Service removed them to restore it to its 1869 appearance.

More than a century ago, log cabins were a common sight in Appalachia and in other rural areas of the eastern United States. Samual and Elizabeth Matthews built this cabin near Galax in 1869. Made largely of oak, it has one room on each of its two floors. Over time, the family installed a wood stove and added a bedroom, a metal roof, and weatherboarding.

In 1956 Matthews Cabin was donated to the National Parks Service. Workers carefully restored the structure to its earlier appearance and moved it to this site.

Because there were many small sawmills, frame houses were also common in Appalachia. The Mabrys built their home on this site about 1914. They used boards and chestnut paneling sawed at their mill and workshop.

Visually, the cabin is perfect.  It is beautifully rustic. It is also photogenic if you can get the light to cooperate.

It can seem contextually anachronistic if, after the mill, you are all geared up to learn more about Ed & Lizzie Mabry.  This cabin, especially in the condition that it has been restored to, predates the mill by almost fifty years.

At this point, the park is truly about rural Appalachian living rather than just one historic couple.  It’s also a little “all over the place” in terms of time. Some of the tools and skills on display here are still alive and well in the region. Inside the cabin, Park Rangers give demonstrations of skills like using a loom, basket weaving, and broom making.

Old tools and vignettes dot the walkway that loops around the cabin. In addition to the bark mill below, there is a lumber drying rack, a display of mill stones, a sorghum mill, a whiskey still, a log cart, and a blacksmith shop.

If the old tools pique your interest, you should consider checking out the annual Blue Ridge Folklife Festival in Ferrum each October. It is a huge festival that focuses on traditional skills that have never been entirely put away here.  For more photos of that, see this blog post from our visit in 2015.

If you can make it to Mabry Mill on a Sunday afternoon any time from Memorial Day to October, there is live music from 1 to 4 in the afternoon.  This is another example of when it’s handy to have lawn chairs with you.  There’s plenty of room and plenty of good music.  The National Parks Service website has a complete list of scheduled performers.

For more information on Mabry Mill, please check out the following links:

4 thoughts on “Most Photographed Mabry Mill”