“Hi, I’m Carl! I have a belly full of hot cocoa mix and a head full of marshmallows.  Take me home, heat up a pot of milk, and watch me melt away into delicious hot chocolate.  I’m only around once a year, so drink up while you can.”  — Carl

I received a wonderful holiday gift from one of my colleagues this year. He (my colleague, that is) is an amazingly genuine and thoroughly Christian man with a very keen wit and a truly wicked sense of humor.  He and his wife are also foodies.  They know their cheeses and chocolates, and a lot more besides.   Carl The Snowman is from Kate Weiser Chocolate in Dallas, Texas.  This is their beat.

The concept is adorable, if a little sadistic.  I guess there is a reason we aren’t supposed to name food. We had meant to give Carl a warm milk bath for Christmas but, somehow, we just never got around to it.  When the first snow fell this year, we decided it was time.

We all gathered in the kitchen while my husband was warming up the milk.  I had my camera ready and I planned on taking a video of it with my phone.  Alas, I had no idea how quickly poor Carl would meet his demise. It actually seemed a little violent.

It started off well.  Carl looked cozy in the warm milk as the snow was falling outside and hitting the glass panes of the patio door just feet away.

However, he succumbed quickly.  I have to warn you that the following photos are graphic. 😉 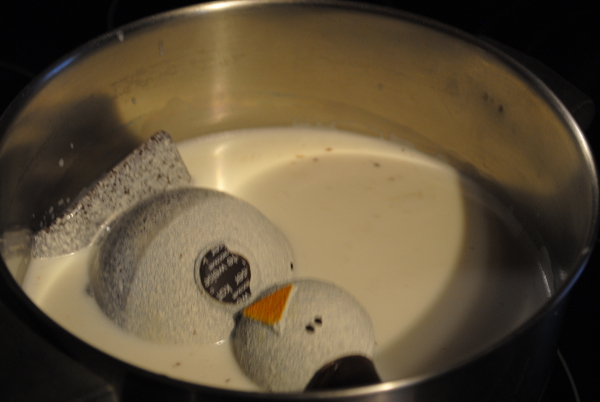 Within moments, he had breached, releasing the cocoa mix.

His carefully refrigerated shell was next.

Until, finally, all that was left of poor Carl was his little face staring up from the ladle. 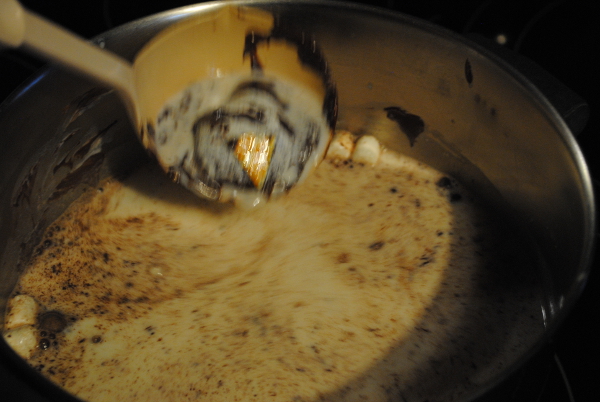 And then he was gone.

In retrospect, I’ve decided that Carl is the consummate New Year’s Day tradition. We must have a Carl the Snowman next year too, as a way of seeing out the old year and bonding in the new one.

While I did not manage to get a video of Carl’s bath, I found the video below that shows the whole short process.  In it, he takes less than a minute and a half to become hot cocoa with marshmallows and, somehow, the process doesn’t seem so violent.  I think that it may be the Christmas music.

2 thoughts on “Carl The Snowman”