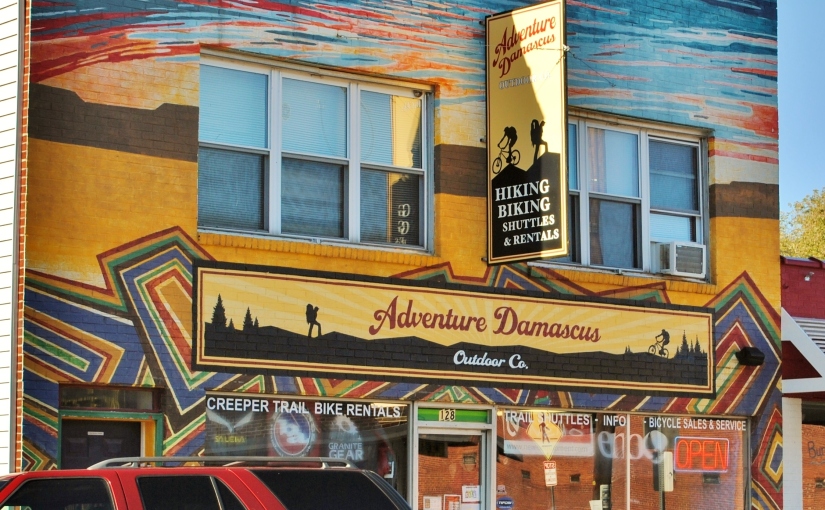 If you are looking for a fun, quick, and inexpensive way to make wonderful memories over a weekend (or a weekday), we have FOUND it.

Damascus, Virginia is about a 3 to 3.5 hour drive west from Henry County.  It’s a possible day trip but six hours on the road deserves a little bit of rest along with the fun, so we opted to take a leisurely drive out to Damascus on a Saturday, ride the Virginia Creeper Trail on Sunday morning , and then be back home by that afternoon.

Hurricane Matthew was just hitting a front in southwestern Virginia and we drove away from rain in southern Virginia into what felt like true fall.  We arrived in Damascus just before the shops all closed with the remnants of the rains just about spent.

We didn’t know what to expect from Damascus but we were pleasantly surprised to find it to have a small but vibrant downtown with several choices for restaurants, a little shopping, several outfitters, and a liberal dotting of colorful murals throughout.  There are seven different shops that offer bike rental and shuttle services to ride the Creeper Trail.  There are also several hiking outfitters.  It turns out that sidewalk that runs through the little downtown is actually part of the Appalachian Trail. The building in the picture above is Mt. Rogers Outfitters.

We had made a reservation for bikes with Adventure Damascus for ten o’clock on Sunday morning. According to the shopkeeper there, October is their peak month so reservations are definitely recommended. They are busy throughout the year, he said, running seven vans of bikers up the mountain each hour, but the peak numbers of people coming to see the fall foliage means that demand exceeds supply in October.

We had booked at a local B&B that turned out to be on the outskirts of town and were so irritated by a creaky bed and the other guests that we skipped breakfast and headed into town to explore before our appointment.  There are no chain hotels in Damascus but there are all kinds of lodging choices including cabins overlooking the river.  In the future, we will try one of the places in downtown, either The Dancing Bear Guest House or the Old Damascus Mill Inn.  Both look great and within walking distance to everything.

Damascus is a beautiful town to explore.  From the town park where they have a real red caboose and a little black locomotive (which I am assuming is art), to murals all over downtown, and a pond filled with ducks and geese over by the Old Damascus Inn, it is a place that is tempting to just putter around in.  There are a couple of antique/art gallery stores but they were not open during the hours that we were there. There are several restaurants in the downtown area too and everything the we tried was fantastic. We ate at Bobo McFarland’s, Mojo’s Trailside Cafe and Coffee House, and the Old Damascus Mill Inn – all within twelve hours.  If we had had more time, we could have made it to Hey Joe’s, also in downtown. We also missed two restaurants along the 17 miles of trail: one whose name I did not catch and can find no evidence of on the Internet (but I promise that it’s there) and the Creeper Trail Cafe (famed for its chocolate cake and bacon cheeseburgers, per the attendant at the depot at the top of the trail).

When it came time to go, the folks at Damascus Adventures let us each pick out a bike and adjusted it for our height. That fellow’s got a good eye for that. We could pick out helmets if we wanted to; they are strongly recommended but not required. Then we filled a van with as many bodies as it could hold (13, plus the two up front) and drove up to the Whitetop Depot, which doubles as a gift shop and information center.  You can also get great info on Arkansas there, as the host is a transplant.

The Virginia Creeper Trail is a 17-mile trail from the top of the mountain down to the town of Damascus. It continues on from there to Abingdon but this stretch to Damascus is just about all downhill.  They say that the last 3 miles are flat but we found that we still didn’t really have to pedal until the last mile or two.  There is no uphill at all. It requires no exertion to get down the hill.  You have to be able to keep the bike upright and hit the brakes to maintain a safe speed.  That’s about it.

There is an incredible number of old railroad trestles converted to boardwalk bridges along the way.  When you are not on a trestle, the trail surface is either natural earth or small crushed rocks.  In a few places, there are some bigger rocks that are nice to avoid on a bike but we didn’t find it to be any kind of an issue at all.

Streams, big and little, run alongside the trail and under the bridges.  It is a natural trout habitat although, after the area was logged in the last century, the native brown trout are mostly in the tributaries.  These streams along the trail are stocked with trout and there are several spots set up to make the river more accessible, with at least one with grates along the bank.  One fisherman passed me as I stopped to take the picture below and he told me that, not only was it the most beautiful waterfall on the stream, but he always caught a fish when he fished here.

At the top of the trail, the bridges seem to take you through canopies with the streams far below. As you go further down the mountain, the streams become more accessible. They are beautiful.

There are also placards all along the way with information about the Trail, the area, and the history.  With all the beauty and the inviting tidbits of information, I was surprised by the number of bikers who raced down the trail.   The faster bikers pass on the left, all saying “On your left” as they approach.  Why would anyone hurry this? We were told that it takes between 2.5 and 3 hours to get down the trail.  With our leisurely pace, we used every bit of 3 hours and saw some absolutely beautiful sights.

The trail, for us, ended just before the Town Park that we had explored that morning. There had been a night ride the evening before and there were still white arches along Bridge 16 lit by Christmas lights.

After turning in our bikes, we walked across the main street to the Old Damascus Inn where we had an incredible lunch as we watched the water spill over the low dam and fed the occasional duck an occasional bit of a scrumptious waffle fry. I suspect that we weren’t the first ones to do that.

In fact, we were so impressed by our lunch at the Old Damascus Inn that we checked on rates for next time.  They were actually less than we had paid for the B&B.

Damascus is at the top of my list now for places that my husband and I have gone during our marriage.  We think that this will now be an annual trip, but possibly in the summer. It is amazing what we got from this trip and how short it was.  In just a few hours, we were entirely revitalized and had banked more wonderful memories together.

One last thing… If you decide to go try out Damascus, be sure to get by The Damascus Brewery.  Their marketing is a little suggestive but the brewery itself is a welcoming spot and dog friendly.  There were three big huskies and a lab there when we visited. It’s a bit outside of downtown but within walking distance of some of the cabins along the river.

12 thoughts on “Day Trip Down The Virginia Creeper”