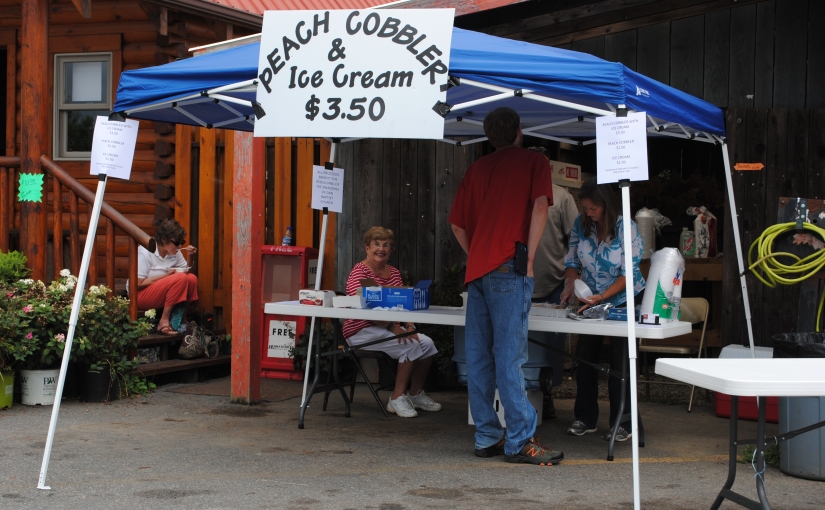 We go up to the Poor Farmers Market here quite a bit and I love following them on Facebook. The owner posts a lot of pictures from Meadows of Dan as well as historical tidbits and news of business for the area. This is where we discovered white sweet potatoes which are, possibly, the perfect food.  They taste like regular sweet potatoes but have the look and consistency of regular white potatoes. Who know that a vegetable could be so interesting?

The store is full of souvenirs – autographed books by local authors, t-shirts, cast iron cookware, holiday ideas, jams and jellies, and every little odd assortment of things that you can imagine. There is a deli counter and ice cream in the back and a covered sitting spot to eat.  Today, they had the most colorful metal yard art shaped like roses, bird houses, and huge roosters. You just never know what you’ll find at Poor Farmers Market besides white sweet potatoes (and peaches).

Jim Lord played live music out on the stage at the back of the parking lot and a few vendors were scattered about.  The bulk of the vendor tents were set up down the road by the Community Center but this is where I wanted to be.

Just across the street from Poor Farmers Market is The Meadows Mercantile. It’s a long building that looks vaguely western.  You can enter on either end of the building which is divided into four rooms and filled to the brim with souvenirs and everything Christmas.  They have a fantastic selection of t-shirts right now.  We bought three and I’ve already admitted that I am going to have to go back to get the one that says “The Mountains Are Calling And I Must Go”.

Two of the rooms are souvenir-type things and then the next two rooms are all Christmas.  Ornaments. Trees.  Nativities.  You name it.  Mother got her very first Virginia Christmas ornament – of a black bear. (She keeps wanting to put out food scraps for “critters” but we have chickens and just about all “critters” eat chickens.  I told her that is not outside the realm of possibility that she could attract a black bear by doing this.  So far, that seems to have worked.)

The Meadows of Dan community lost a significant landmark last year.  The Meadows of Dan Baptist Church burned to the ground on March 5, 2015.  Poor Farmers Market has photos of the fire on their Facebook page. It was so sad. Such an incredible loss for the community. Proceeds from the peach cobbler sale will go to rebuild.

They’ve had a new addition to the community in the Toy Time Folk Toy & Science Museum.  The museum has a TripAdvisor badge on their door and they are already up to #8 of 11 things to do in Meadows of Dan.  They’ll have stiff competition for the top spot with Mabry Mill, Nancy’s Candy Company, and Primland but I think that they are going to be very popular.

The building used to be a gun and knife store, hence the bars that make it look like an old jail inside.  Before that, it was a general store.  Now, toys and puzzles line the walls and invite people to play with them to see how they work.  I was able to operate the dreidel, putting me on a technical skill level with, I think, a five year old, but we needed help with a lot of the displays.  One of the employees helped us operate several of the toys, including a chair that would raise you up by compressing air in a vacuum tube next to it.  At least, I think that was how it worked. Compared to other science museums I’ve seen like this, it’s really engaging and there is a lot to see and do.  Kids will absolutely love it and adults are going to enjoy themselves too.

After the Folk Toy and Science Museum, we decided to drive down the Blue Ridge Parkway and investigate an old country store  I had read about in “This Old Store”, the Mayberry Trading Post.

There’s a preview of the book available on Amazon.

It’s a very readable, short book.  Apart from the history of the store, it gives the history of the area and spends some time on several notable personalities that lived here. The community of Mayberry has dwindled to just a few souls but the country store is still there and open for business.  Interesting note in the book (page 89), Andy Griffith’s mother had relatives here when he was a boy and he had come to Mayberry to visit them back in the day. “Information such as this”, the book says, “makes a pretty strong circumstantial case for this place here being the source of the name of the television Mayberry, if not a documentable one.”

I’ve since read that many places compete for being the source of the name of the idylized small town of Tinsel Town fame.  Whether it is or not is probably moot at this point.  Whether it is the town, or not, I mean.  It is indisputably a remnant of the past that many of us have romanticized in a nostalgic fervor so that it is like Brigadoon, a small village protected from the ravages of change by an enchantment that hides it away from the world for a hundred years each night as the villagers sleep.

I read once that the reason that vintage Victorian clothes are so important is that there were only so many made (by nature of definition). Once they are gone,  and they can’t last forever, that’s it.  You can’t make more genuine articles. Old country stores like this are the same, I think. If you are of the same mind, I think that you would really like stopping by. And buy a shirt or a hoodie, or a jar of jam … just to keep the lights on.

It was a rainy day but we managed to grab some shots at Lover’s Leap on the way up. We actually went to Fred Clifton Park, right next to the outlook, which I believe has better views.

This is one of the views from Fred Clifton Park.  It’s pretty much the same view as from Lover’s Leap but with more room to stand. The local legend is that a white settler and an native American maiden, shunned by both sides for their love, leapt from here into the valley below.  It’s a popular story for a lot of places, so I have my doubts.  It is a breathtaking view though.  The camera couldn’t capture it but there are farms and vineyards down in that valley.  It’s truly gorgeous.

I’ll close with this shot of Mother taking in the view.  I think that she is really liking it here.

4 thoughts on “It’s Peach Time in the Blue Ridge”