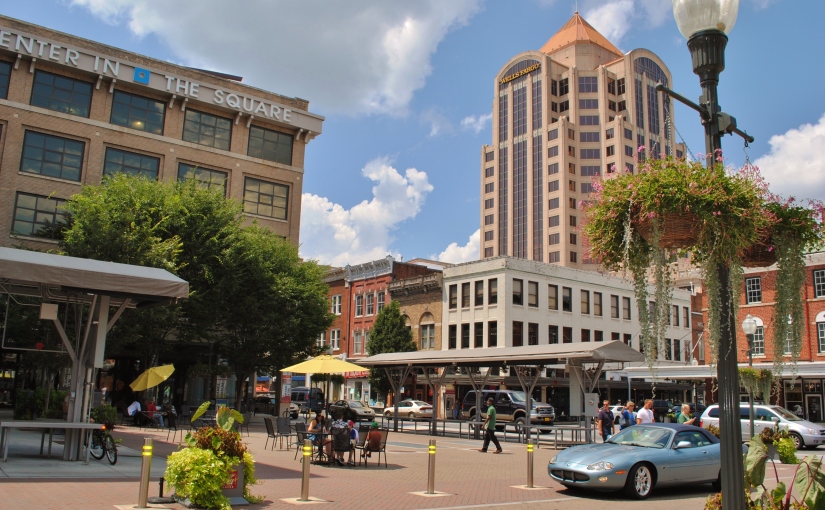 Roanoke is a city that is beautiful in the rain. A little under an hour north of Henry County, Roanoke is a great place to get away from rural life and take in something more “cosmopolitan”, a quick pint at a craft brewery  (there are several), or just to grab lunch while letting the hustle and bustle of a real city remind you that you are still part of the human race. 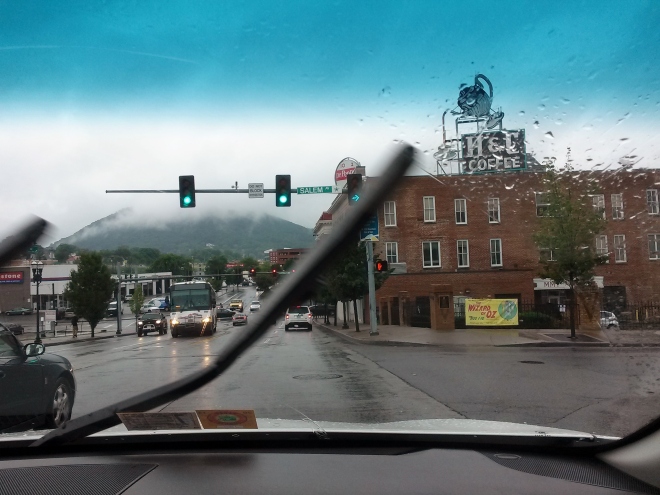 Every morning, we watch news from Roanoke and we thought that it was high time to take Mother in to see Market Center. We’ve only been once before and were so impressed with Fork in the Market that we went there again.  The food was predictably good but the craft beer selection was poor this time.  Last time we were able to get  S’mores porter (by DuClaw, I think?).  This time, their only porter was Nitro Vanilla by Breckinridge which is a good porter but they were out. Still, the food was good and the sidewalk seating is great.

From the Fork in the Market sidewalk seating, you look out at a seafood restaurant, Billy’s, and the Taubman Museum.  People walk by and a steady stream of traffic makes for great people-watching.

Fork in the Market is one of several restaurants in a building called The City Market. While this is a beautiful building on the outside, the inside is basically a food court with access to all (or at least some) of the restaurants that are also accessible from the outside.  The perk to City Market is easy access to clean restrooms and a series of beautiful mosaics at each doorway.

I made a point to get a shot of each of the mosaics. A history of the mosaics – 2,000 pounds of ceramic tilework by artist Cheryl Foster – is available on the City Market website.

I wish that there was more information about each mosaic but even the building’s website gives only a cursory explanation of their commission. Were these real personalities connected to the building? I don’t know.

The colors are fantastic and there is so much detail.

The toothless, banjo-playing boy with his dog, in particular, could use an explanatory placard.  This is an area rich in musical heritage but the mosaic, without more information, seems more like a caricature than a tribute.

Market Center is a shopping district across the street from City Market and next to Center in the Square.  It is not synonymous with Center in the Square, which you will gather if you read the management responses to reviews on TripAdvisor. TripAdvisor is a global outfit not based in the U.S. and it has a real problem with listing districts like Market Center that don’t have an identifiable individual address.

Market Center is a lively area that hosts a farmers’ market on Saturdays and has a long line of shops and open-air vendors along the street.

Our big “find” this trip was ChocolatePaper.  My husband called it a “random stuff” store when we walked in but then smiled like a cat with a canary when he went far enough back to find the chocolate counter.  I had picked up a bag of Nancy’s Candy Company’s chocolate covered cookie dough balls (Nancy’s is a Meadows of Dan outfit) until I found the counter of truffles and chocolate covered delicacies.

The sandwich board outside says that they keep the inside temperature at 66 degrees for the chocolate.  I can’t recommend a better way to beat the heat this summer than ChocolatePaper.