Here in Henry County, we are very close (about 3 miles, depending on where you are standing) from the North Carolina border. In fact, when I head to the Ridgeway library, I actually cross the border into North Carolina and back into Virginia on my way.

Ever since we moved here, a neighbor who became a very close friend has been telling us that we had to go check out the waterfall on DeShazo Road.   From what he was saying, I was picturing a smaller stream with an abandoned falling-down mill and an arduous hike but I really couldn’t have been more wrong.

The only access to the waterfall is along DeShazo Road, where a trailhead prevents access by ATVs with pylons across the entrance.  People park alongside the road to make the short hike down to the falls.  When we visited shortly after a rain, we passed two gentlemen coming up from the falls as we were entering and a lady out walking her dog coming in as we were leaving.

The trail is clearly marked and mostly level until you actually get to the falls.  There was no litter.  The trail floor is natural earth so it probably has the potential to be muddy although it is the type of soil that is abundant here and drains well. 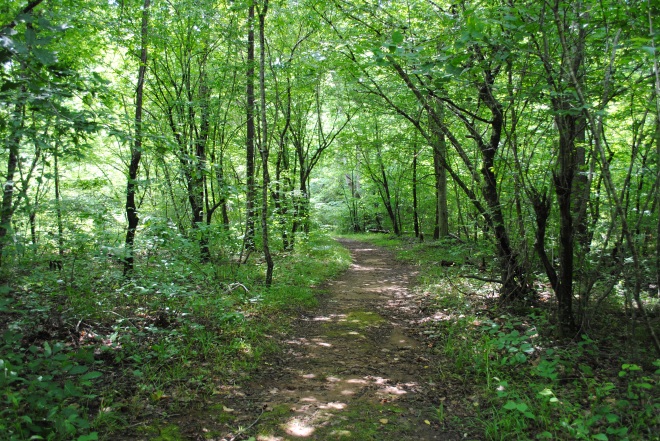 It is a very short hike to the waterfall.  I’m guessing it is about a quarter of a mile. Some people say that you can see the footings of an old mill at the top of the waterfall.  For me, it is hard to distinguish stone footings from natural rocks.  We felt that the channel in the foreground of the picture below might be intentionally carved by human hands but there is no way to be sure. 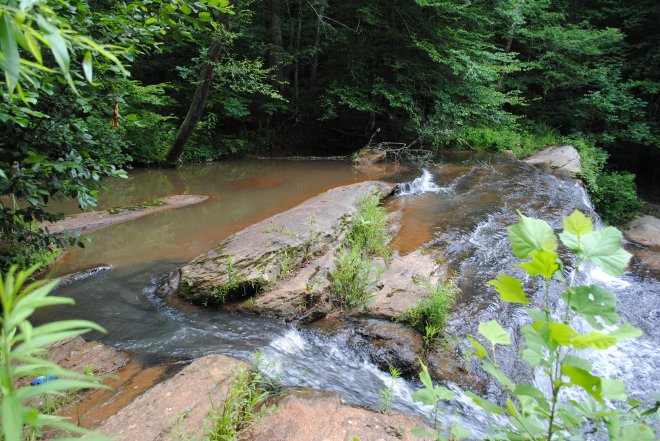 The only bit of the trail that was difficult at all was the bit going down to the base of the falls.  There were two paths – one dangerously close to the edge of a drop off and another maybe twelve feet away that was pretty steep.  We did this trail before Mother had a walking stick and she was wearing open toed sandals.  Even at that, she didn’t have much trouble with it, only requiring a gentle push up the hill as we were leaving.

I am hoping that there will eventually be trails leading from the Mayo State River Park up to the falls but it will be a good hike, distance-wise. In the meantime, the falls are reasonably accessible and quite beautiful.